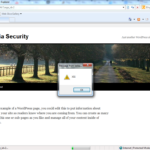 As advised before, WordPress revealed 3.0.4 version within security patches which occured because of a vulnerability. However, a high level vulnerability in 3.0.4 declared by a security research group named Anatolia Security.